This somewhat smaller DIN A1 sized map was meant as a supplement to my big map of the Roman Empire. It was published by Sardisverlag as The Roman Era Orient. The map depicts Roman Syria and the surrounding client states, the entire Parthian Empire, as well as the remaining states of western Asia together with the major trade routes over land and through the Indian ocean about 64 CE. An expanded and updated version of the original map, The Parthian Empire and the Silk Road, which was enlarged to DIN B1, is available as digital edition or custom made print. The extra space added to the north and east allowed to depict the entire Kushan Empire as well as the course of the ancient silk road through the Tarim basin to Chang'an, capital of the Chinese Han dynasty.

Prints of the Parthian Empire map are also available as part of the double sided World of Ancient Rome poster, for which it was scaled down to 1:6. Million.

HD prints of this map can be purchased from my online store. Both variants are also available as download. 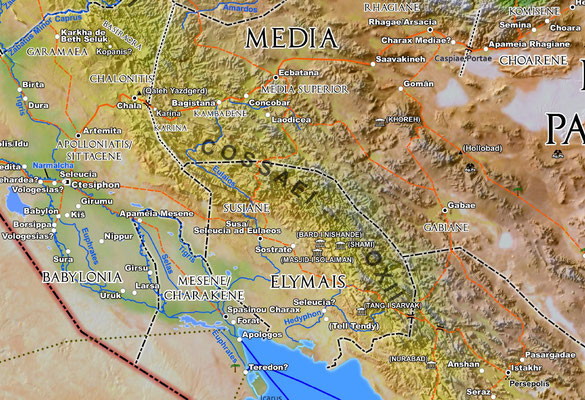 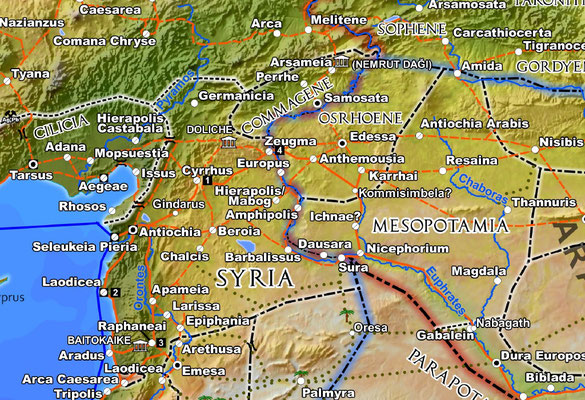 In order to maintain consistency with the Imperium Romanum map, as many parameters as possible were kept unchanged. This includes the scale of 1:4.5 millions, as well as the numbering of the grid and the chosen symbols. Only the standard parallel of the equirectangular projection was changed to 30°N in order to obtain the map segment shown.

Just as for the Imperium Romanum map, the background was composed from landclass and bathymetry data, combined with a shaded relief. The underlying geodata again comes mostly from Natural Earth and the shaded relief was calculated from the SRTM30 data set of the U.S. Geological Survey. The geodata was corrected in those places where the topography has changed significantly since ancient times, especially the coastal areas. In addition, numerous rivers were added.

Borders: During the early principate, both the Roman east and the Parthian Empire largely consisted of the territories of client states, governed by their own kings and dynasts with various degrees of autonomy. However, since these states were considered integral parts of the respective empires [1], it was decided to emphasize the boundary of the imperial realms of influence, instead of the boundary of the actual provinces (as had been the case with the Imperium Romanum map).

In the east, only very little evidence exists for the exact boundaries of the Indo-Parthian Empire. A large part of its history can only be reconstructed from coin finds and their distribution. Even the relationship between the Indo-Parthian Kings and the Great King remains a mystery.

It should also be noted that the political structures on the Roman Levant also had to be simplified on this map. For instance, there are some smaller Tetrarchies that cannot be localized. Among them are the territory of Varus, later assigned to Agrippa II., which had only been written about by Josephus (BJ 2.12.8.), as well as Chalcis, Ampeloessa and Gabe (Plinius NH 5.74), which are suspected to have been located in the relatively unknown rural areas of Lebanon and Anti-Lebanon. They lacked large and easily traceable urban centers and lived centered around numerous local sanctuaries.

In the Roman world, the difference between villages and cities is often only of a legal nature. The Near East of the time was characterized by a network of villages, among which some had the role of regional centers and could rival both the size and the appearance of cities.

Similar caveats apply to the capitals of the empire. Sources note a whole string of cities along the Ktesiphon – Nisa axis as at least temporary seats of the Great King or sites of a royal palace. Examples are Hekatompylos, Rhagai and Ekbatana. The most likely sole candidate for the time frame of interest in this map is Ktesiphon, which is why it was marked as the capital here [2].

The Great Wall of Gorgan, whose construction is often attributed to the Parthians in older literature, according to more recent research [3] dates to the Sassanid era and is therefore not included in the map.

Even the earliest descriptions by Greco-Roman authors of what today is Iran include a people named Paraetaceni (or spelling variations thereof) at different locations and in place name references. This name is a generic term that describes mountain peoples living far from the large population centers and is most likely derived from the old Persian word Paruta, meaning mountain.

Road Network: The existence of a courier system along the King‘s Roads (similar to the Hellenistic and Achaemenid predecessors) is proven by mentions of royal stations in the Mansiones Parthicae of Isodorus Characenus or by the Parthian documents found in Avroman. Given the scarcity of sources, only the route described by Isodoros is noted on the map. It constitutes the backbone of the Parthian Empire, connecting the eastern and western border via all capitals. Most other roads beyond the Roman territories are based on those inscribed in the Tabula Peutingeriana, which shows a state during Parthian times in its eastern part.

Territories under Roman control in the far east of that time also did not yet have many truly Roman roads. In the south, reliable proof only exists for a connection between the provincial capital Antiochia and the Claudian colony Ptolemais, which was established for military reasons in 56. In the Pontus area, an inscription north of Amastris shows that the coastal road was already under construction in 45. It is included in the map, up until Sinope at the boundary of the provincial territories.

Large scale extension of the road network in the east started only with the Flavians. This continued under the adoptive emperors and throughout the Parthian wars of the 2nd century and is documented by various mile stones from Iudaea and Palmyra up to Cappadocia and Pontus.

It follows that the classification of roads is relatively problematic. Typically, a Roman Via Publica is differentiated legally and documented on site through road lists and mile stones, so that it can be clearly recognized even if the road itself does not consist of a man-made road surface. However, the transitions between non-public roads and paths remain fluid, especially in the areas that are adjacent to deserts. In addition, it was always the intention to maintain the road classifications that were used in the Imperium Romanum map. In the end, the decision was made to classify paths through densely populated, geopolitically organized areas as roads, and to include the various side branches of the Silk Road in the east.

Traveling Times in the Red Sea and Beyond: All times noted on the map are the actual travel times for the corresponding route. Given the wind system of the Red Sea and the Indian Ocean, the travel times along a multi-station route may deviate drastically, which can be misleading [4].

Ships had to leave Egypt in summer so that they could cross the Red Sea using the predominant northerly winds of this season. In the Gulf of Aden, they would then encounter the Southwest Monsoon, which allowed to continue towards India, but made a change of course on the Horn of Africa (Aromata Promontorium), so as to travel in a south-western direction along the East African coast, impossible. Doing so only became possible from around November, when the Northeast Monsoon begins. Likewise, the ships had to wait for 8 months in Raphta for the return of the Southwest Monsoon. Back in Egypt, another 6 months had to pass before the next journey could be started in the following July. With the then common rigging (just as with more modern rigging), travel against strong Monsoon winds was practically impossible.

Eastern Arabia and the Roman Near East