Classical Greece and its Neighbors

Highly detailed, large scale map of ancient Greece and surrounding territories in the 5th and 4th centuries BCE. The map depicts the political situation in about 431 BCE, shortly before the outbreak of the Peloponnesian War.

HD prints of this map can be purchased from my online store. 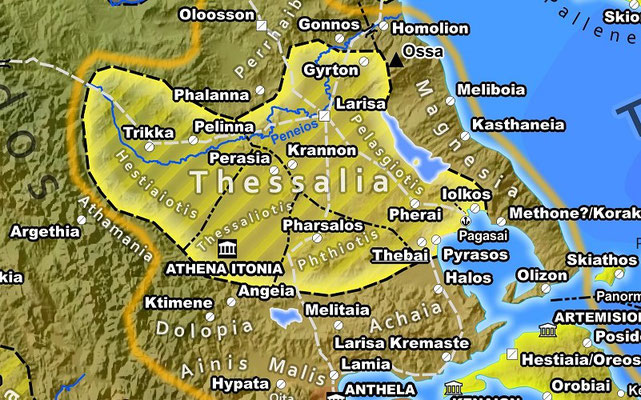 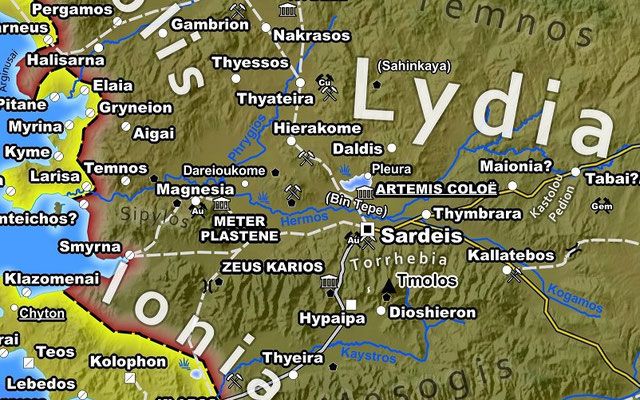 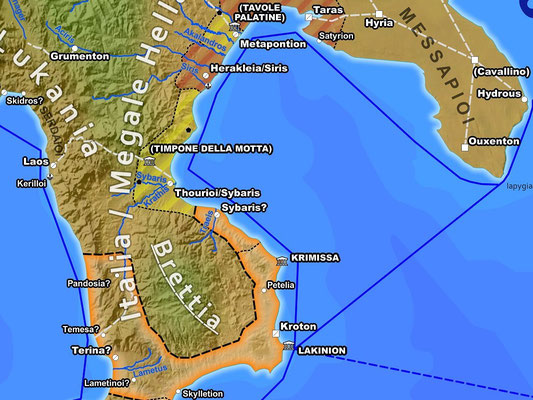 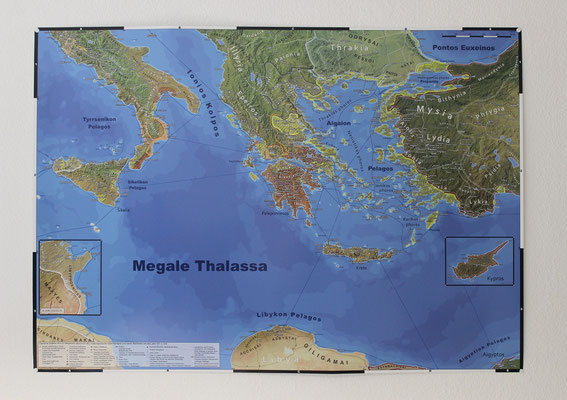 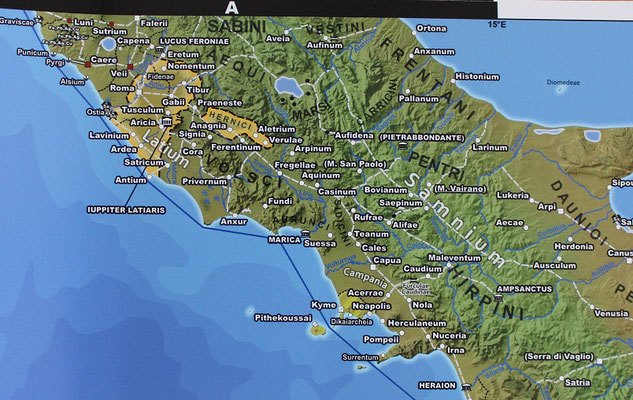 Commentary - Classical Greece and its Neighbors

Despite the map focusing on the era of the Delian league and the Peloponnesian War in the latter half of the 5th century BCE, it should also be suited to cover the entire classical period in this part of the world. Thus 4th century BCE settlements and sanctuaries were added and the coverage expanded, to include regions relevant for the soon following rise of Macedon and Rome, but especially also Carthage in west. There, the entire 4th century was dominated by conflicts between the Sicilian Greeks and their Punic neighbors, with war erupting again and again.

Again, the map should provide a view of the Mediterranean as seen from space. Thus for the background I combined landclass and bathymetry data from Natural Earth with a shaded relief. Compared to my previous maps, the greater scale of 1:1.5 million required many additions and enhancements of the base data.

A greater number of additional rivers and islands were added and existing coastlines improved when necessary. At places where the coastline has changed significantly since ancient times, the geoadata was accordingly modified. A higher resolution of the shaded relief was also desirable and achieved by recalculating it from the EarthEnv-DEM90 digital elevation model [1]. The map uses an Universal Transverse Mercator projection, UTM Zone 34N, EPSG 32634, optimal for Greece.

The 4th century places marked on the map are explicitly towns and sanctuaries (re)established in this century. It is not the date of their first appearance in our sources. This includes settlements like Philippopolis/Plovdiv, which despite being built on site of an older Thracian predecessor, was as a new Macedonian Polis, receiving a significant number of new colonists.
Especially in inland Italy or Asia minor numerous cities are only mentioned, or begin to produce epigraphic material, in Hellenistic or Roman times, but according to archaeology existed already long before that date. In most cases a continuous, uninterrupted tradition can be assumed, thus they are not distinguished on the map.

In the classical period and beyond inland Asia Minor also was a mostly rural space with very few urban centers. Only later this should change, as Hellenistic and Roman governments begun to pursuit a long term policy of urbanizing the interior. Thus it should not be expected that the places marked on the map already had a comparable appearance to the coastal cities, although in most cases admittingly not much is known about them during this era [2].

In the border zones of Greece‘s cultural sphere, like Caria, Lycia or Pamphylia, many cities had a mixed Greek and native population. The gradual assimilation process into fully Greek cities sometimes took centuries to complete. Thus usually no precise dates can be given when exactly they became Greek Poleis. For their classification I orientated myself on the detailed data collected by The Copenhagen Polis Centre for each city [3].
Generally, if a city on the map is distinguished as a Polis, it only refers to the city’s political structure, not their ethnic composition.

In some cases it is hard to decide if a settlement should be marked as a sanctuary or city. One example is, as the name already indicates, Hierakome with the sanctuary of Artemis Persike in Lydia. The cult became very prominent in later times and can already be traced back at least to the 4th century. However the place produces also older Lydian era finds. Was later Hierakome originally a settlement which cult became prominent or begun as a rural sanctuary which developed into a considerable settlement? A question that can’t be answered conclusively without excavation on the site [4].

As far as possible the map depicts the political situation in the last decade before eruption of the Peloponnesian War, about 440 to 431 BCE.
At least currently, it is in many cases not always possible to trace the borders of the numerous city states with some accuracy at all. For others we can only determine their traditionally held territory, but not the precise borderline at a fixed date, like 431 BCE.

Following the maps philosophy outlined above, I also included 4th century forts on the map. Here too, often the sites are not, or can’t be dated exactly. As a matter of debate it seems likely that especially the hillforts in Samnium and other areas of central Italy only originated during the era of conflict between the rising Roman Republic and the local tribes in the 4th century.
Just as the heavily fortified land frontier in northern Attica in its final form, which is depicted on the map, was only created as reaction to the experiences of the Peloponnesian War [5].

The Delian League is divided into five Phoros (tribute) districts as they existed until 437 BCE [6]. Not included are allies and member states that most likely only entered Athens league during the course of the Peloponnesian War. Islands like Anaphe, Pholegandros, Sikinos and Thera, for which it was suggested that it was Lysicles expedition of 12 ships in 428 BCE [7] that brought them into Athens sphere of influence or Kephallenia, whose loyalty had to be secured by an military expedition during the initial phase of the conflict [8].

Thessaly was surrounded by a number of regions, namely Dolopia, Ainis, Oita, Achaia, Magnesia, Perrhaibia and later Athamania, that were eventually subjugated by the Thessalians and integrated into their state. However during the classical period they were still separate polities, capable of pursuing their own agenda, even if nominally already Thessalian dependencies. In Thucydides too, only contingents of Thessalian troops fighting for the Athenian side from Thessaly proper are mentioned. Thus Thessaly its dependencies and surrounding regions are represented accordingly on the map.

In 432/431 BCE the political situation in the Macedonian-thracian border zone changed very dynamically. Olynthos and a further number of Chalkidian cities had revolted from Athens, which was waging war against Macedon. There, according to the philosophy behind the map, long term allegiance to the Delian League takes preeminence over depicting the momentary political situation. The Poleis of Therme and Methone most likely both came under Athenian control in 432/431. However, the former was already returned to Perdikkas in summer 431 [9], while Methone became a member of the Delian league and appears in the Athenian tribute list several times until 415/14.

What was said above about the difficulties of deciding about the Polis status of cities is especially true for the city kingdoms of Cyprus. Since the Bronze Age collapse the island had been a melting pot of various cultures, Greeks, Phoenicians, native Cyprian and their changing eastern overlords. Before the kingdoms were disestablished early under Ptolemaic rule, their central cities were rarely explicitly called a Polis by contemporary authors and also epigraphically only once among hundreds of inscriptions the inland city of Idalion [10].
On the map the Vouni palace is marked as the seat of a Persian governor, possibly installed after the islands participation in the Ionian revolt. This is not the only discussed function of this structure. Alternatives, such as an outpost of the pro Persian of Marion have also been suggested [11].

Regarding the Persian Royal Roads, i.e. the routes served by the royal postal service (Pirradaziš), it has to be said that even for the better-known segments, the exact route often can only be estimated.  Generally, the available evidence, such as the Persepolis tablets, allows us only to firmly reconstruct their origin and destination. The exact path, however, can only ever be speculative.

[2] In detail Marek 2010 or for archaic and classical Lydia especially, Roosevelt 2014

The literature consulted by me when making the Classical Greece map. For better readability, the list of sources is separated by topic into sections. We begin with a list of more general topics, then continue with three geographical subdivisions: Achaemenid Asia and Egypt, Greece, including the entire Aegean, and the Balkan Peninsula and finally the West - Italy, Sicily and North Africa.